After a great Saturday race at the Duck Dash 5K for Camp Wonder it was off to Cambridge, Massachusetts on Sunday morning for the Tory Row 5K. A nice running contrast between the two days where Saturday’s run took place in winding residential roads whereas the Tory Row 5K took place in the heart of downtown Cambridge and the early morning race was graced with some much warmer temperatures than were present at Saturday’s run, as well.

The Tory Row 5K starts right in Harvard Square and kicked off nice and early with a 9:30 AM start time. The race featured an out-and-back course that took runners along a gradually  inclined course that led runners into a looped side street section of Cambridge and outside of the Harvard Square hustle and bustle. The course is a USTAF certified 5K course and mile markers were present at each one of the miles along the course and a water stop was at the half-way point thankfully as the warmer temperatures made the water taste all that much better.

Funds from the Tory Row 5K benefits the Cambridge Camping Association. CCA offers affordable day camps and overnight partner-camps, which provide engaging and enriching experiences to children with limited access to these opportunities.

Post-race runners were able to sample the offerings of Wachusett Brewing Company, Jack’s Abbey and Shacksbury Cider along with Spindrift seltzers.

The Tory Row 5K is a great race and is certainly one you will want to check out next year. Be sure to “Like” their Facebook page by clicking here to keep up to date with alerts on next year’s race. 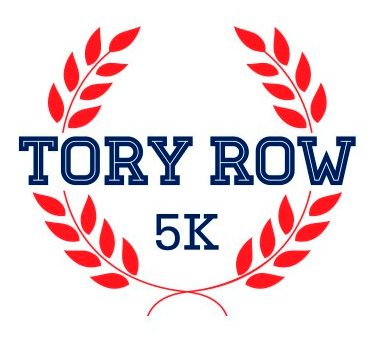 On Sunday, June 12th join The Running Griffin in Cambridge, Massachusetts for the Tory Row 5K. This is my first time running this race and I look forward to seeing you in Harvard Square for what looks to be a great race!

Tory Row 5K isn’t just a race, it’s a full weekend of festivities. Your $40.00 registration fee guarantees you a spot in the race as well as admission to the pre- and post-race parties. Your registration fee includes a Tory Row 5K t-shirt and a drawstring backpack, as well as complimentary beverages and snacks at the Pickup Party and the TR5K Race Party. The top overall winners will receive a handmade laurel crown from Petali Flowers in Harvard Square as well as gift certificates to Tory Row. Top male/female overall will also win a custom engraved TR5K beer pitcher, which can be filled with your choice of draft beer or sangria at Tory Row at any point during race weekend.

The Tory Row 5K is a USATF sanctioned event and course. With professional bib timing services by RaceWire, you can have your result emailed and texted to you as soon as finish the race.

This morning it was off to Cambridge, Massachusetts for the Winter Classic Road Race. The race is part of the Cambridge Classic series which offers a package of races throughout the year taking runners through Cambridge followed by a significant post-race party complete with fresh and free beer from Jack’s Abby Brewery.

I’ve taken part in several of the Cambridge Classic road races and the course is quite crowded with runners and the course is never going to be one that you are going to PR on just given the sheer volume of people tackling the race course. The race course today, unfortunately, was extended from the normal 5K course to a 3.45 mile course due to the Cambridge Police Auxiliary cruiser leading the way making a wrong turn in the first mile of the race.

Huge kudos to the race director for immediately having an email blasted out to all race participants admitting to the error and apologizing for the error. Having run the course before, it was apparent where things went wrong so having the RD step up and take ownership of the issue was smart.

I completed the Cambridge Winter Classic 3.45 mile race with a time of 27:27, good for 7:57/miles. That extra .35 miles made the Hoponius Union from Jack’s Abby taste all that much better!

Let’s face it: some things are just meant to go with one another. Peanut butter and jelly, corned beef and cabbage, Chinese food followed by ice cream and so on. Add to the list beer and running. After a run, there is often times nothing more refreshing than a cool beer to help you get some calories back into the system and cool down after hitting the pavement. This weekend it was a back-to-back weekend of racing with a 5k on both Saturday and Sunday and low and behold each race had a nice beer theme to it.

Yesterday I traveled to Canton, Massachusetts for the Blue Hills Brewery 2nd Annual South Shore Trail Run. Runners checked in at the brewery and then boarded a trolley to the starting line which was just down the road a bit within the State Park and around Ponkapoag Pond. The race time conditions were quite gross with temperatures in the low 40’s and a rather heavy dousing of rain pouring down on runners. The race was an informal sort of fun run with no real timing taking place and the course not marked or marshaled, causing a couple of other runners along with myself to run a wee bit further than the 5k we signed up for. The course was rather sloppy from the rain but after having done so many pavement miles training for Boston it was nice to mix things up a little bit. Post-race, runners boarded the shuttle bus back to the brewery where everyone was able to enjoy two free beers and some light snacks. One of the best surprises of the race was when the race director gave every single runner a case of Blue Hills Brewery’s IPA. Not a bad deal!

This morning, we headed for Cambridge, Massachusetts for the Spring Classic 5k. This race started just in front of the Asgard Pub and just shy of 3000 of our closest friends hit the streets of Cambridge for a nice 5k run. Having done a race that started at the Asgard before, I liked this course much better since it wasn’t just an out-and-back and instead you hit some residential neighborhoods of Cambridge along the way. I felt quite good at the race, particularly after doing a trail run yesterday and after completing the Boston Marathon less than a week ago. Overall, my time was 24:16 which is good for 7:48/miles.

Post-race, runners were treated to fresh beer being poured by Jack’s Abby as well as cases of cans of 21st Amendment Brewery‘s IPA and Watermelon Wheat. Back in my younger days I would have made a pretty nice dent here but instead after enjoying one IPA, thanks to the generosity of my brother who came to watch us run the race, we treated ourselves to Flour Bakery before heading back home.